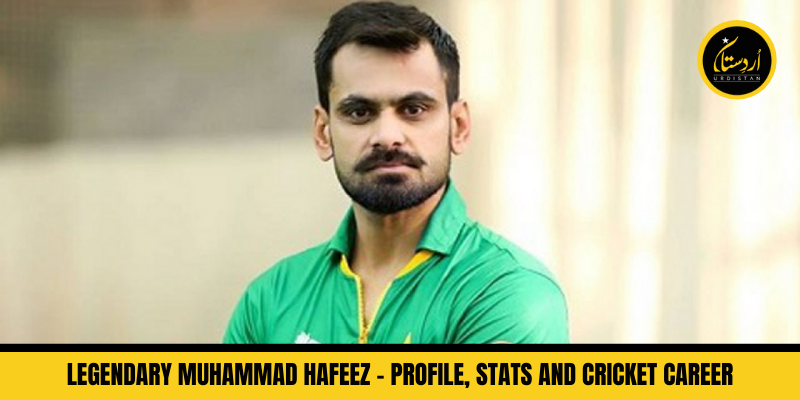 Muhammad Hafeez is a Pakistani Cricketer who is a Batting and Bowling Specialist. He is Right-Handed Versatile Batsman and Right-Arm Off Break Bowler. Hafeez is deemed disastrous to Left-Handed Batsmen; he usually takes few balls to dismiss Left-Handed Batsmen. He is famous for his techniques and is commonly known as “Professor” in the team. Mohammed Hafeez played for more than 35 teams in Domestic, First Class, and Leagues Level.

Muhammad Hafeez was born on 17 October 1980 in the City of Shaheens, Sargodha. Hafeez’s age is 40, and his height is 5 Feet 9 Inches. He received his early education from Sargodha and developed an interest in Cricket during his childhood and adulthood. He used to Play Cricket in the small town of Bhera, Near Sargodha. Hafeez debuted in 2003 against Bangladesh, and his bowling performance was good enough to trust him for the next series against Australia, where his bat smashed a marvelous Century. Later he was selected in Test and ODIs, for a series against England, where he was able to put sound Batting and Bowling Stats on Board.

Hafeez disappeared from the International team after 2006; he was then recalled in 2010 for ICC World Twenty20, his performance was not up to the mark. However, despite the poor performance, he represented Pakistan in ODIs and T20s for several series, but his place in Pakistan’s team was secured enduringly after Skipper and Opening Batsman Salman Butt was found in Spot-fixing and was banned from playing all sorts of Cricket.

Hafeez was appointed Captain of Pakistan’s Cricket team in 2012 for the World T20 Cup held in Sri Lanka. Team Green reached the Semi-Final of the tournament where Host Sri Lanka defeated the Pakistan team. Hafeez’s Performance as Captain and his involvement in other issues made him step down as Captain in 2016.

After 2016, Hafeez carried his Career in all three formats as an Ordinary Player and produced many remarkable Performances. He represented Pakistan in the 2016 ICC World Twenty20, 2019 Cricket World Cup, and ICC Champions Trophy 2017. His Batting Performance in the Champions Trophy final proved helpful for Pakistan to post a good score on Board. Recently, Pakistan Cricket Board has announced the 15-Person Squad for Upcoming T20 World Cup 202; Hafeez is named in Pakistan’s squad for World T20 Cup 2021.