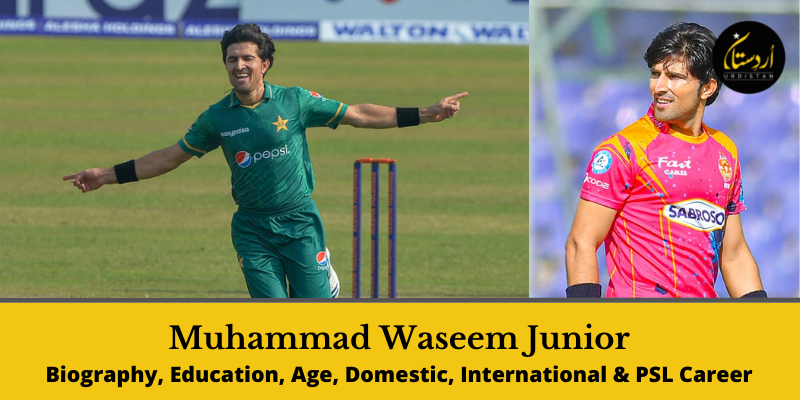 Cricketer Muhammad Waseem is a Paksitani Right-Handed Batsman and Medium Fast Bowler who can bowl at a speed of 140 Km/h. He plays for Islamabad United in Pakistan Super League, Khyber Pakhtunkhwa in Domestic, Muzaffarabad Tigers in Kashmir Premier league, and represents Pakistan’s National team in T20 International games.

Mohammad Wasim was born on August 2001 in North Waziristan (Former War-torn Zone, Cleared as a Result of Operation Zarb-e-Azb). When Wasim was in his childhood and adolescence, His area was captured by Tehreek e Taliban, Pakistan (TTP), and he was not allowed to Play, even he was not permitted to go to School for Education. In such traumatic situations, Waseem was raised and didn’t give up his Interest in Playing Cricket.

Currently, Waseem’s age is around 20.

Waseem said he couldn’t play in North Waziristan, so he decided to migrate to Peshawer, where he started playing for the Local Club then was selected in Under-19 KPK. His Performance in the KPK U-19 team was Superb, which resulted in his selection in the Pakistan U-19 team for ICC T20 U-19 World Cup. He got five wicket-haul in his maiden match against Scotland. Waseem also took 5 wickets while playing against rival India in World Cup Round-Up Match.

In 2020, Islamabad United signed Muhammad Waseem for the Sixth Edition of the Pakistan Super League. Coaches were in search of someone who could bowl at 140 km/h and bats too, so Waseem became their first priority. In PSL 2021, Junior Waseem emerged as a Fantastic Bowler, he made Afridi, Sohaib Maqsood, and Rizwan return pavilion in his debut PSL Match. His overall Performace in the PSL season was enough to select him for Pakistan’s National Team.

Waseem made his International in the T20I series against West Indies, he stumped the Mighty Gayle in his 2nd Over. Since Waseem played 4 T20 International Matches and took 2 wickets with an average of 34.50.

Recently Pakistan Cricket Board announced the Squad for Upcoming T20I world cup which is scheduled in the United Arab Emirates and Oman. Muhammad Waseem Junior is named as Bowling Allrounder for ICC World Cup.