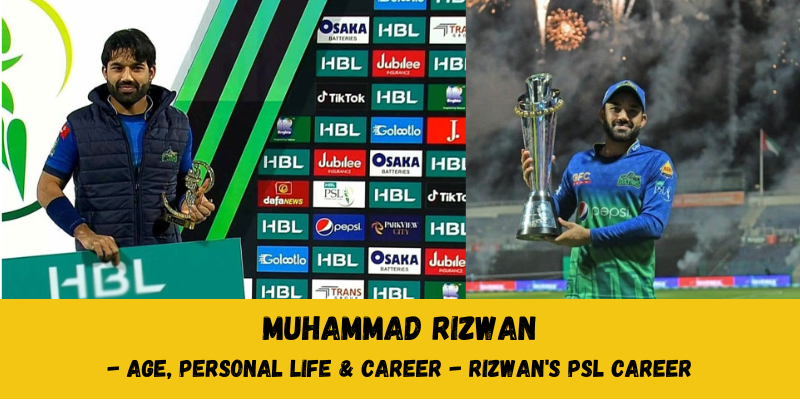 Muhammad Rizwan is Pakistani Wicket Keeper Batsman, Captain of Multan Sultans, and Vice-Captain of Pakistan Test Cricket Team. He is the only Wicketkeeper Batsman to score a century in all three formats of Cricket after New Zealand’s Brendon McCullum.

Rizwan was born in Peshawer on June 1, 1992. Alongside Studies, he frequently took part in Sports Activities. When he reached College level, he became captain of his College’s team. Starting from there, Rizwan started building his strengths for Higher and Professional levels of Cricket. Rizwan started his Domestic T20 Career with Peshawer Panthers and remained with the team from 2008-2015. He played for Sui Northern Gas Pipelines Limited (SNGPL) in First Class Cricket (Quaid E Azam Trophy) from 2011-2019.

Muhammad Rizwan started his First-Class Career from SNGPL’s team. He represented Peshawer Panther in Pasktian Cup Tournaments. In 2018, Rizwan was appointed the Vice-Captain of the Punjab Cricket Team.

Rizwan debuted in International Cricket in 2015 when he was called for Bangladesh’s Tour. However, his Performace didn’t win the hearts of critics and selectors. So he was dropped and brought into the squad several times during 2015-2019. In the Pakistan Super League, Rizwan represented Karachi Kings, and the team management even considered him as a regular option. But 2019 was a massive breakthrough for Mohammad Rizwan; he was called for series against Australia and Sri Lanka, performing well. Later in series with England and New Zealand, he proved his effectiveness in the Pakistani team as Wicketkeeper Batsman. He captained Pkasitani Team in Tests against New Zealand.

Muhammad Rizwan’s Record against South Africa is impressive. In December 2020, Rizwan smashed a ton against the South African team in a Test match; later, he made the highest-ever Partnership of Pakistan in T20s (197 Scores) with Babar Azam. After that, he scored a century in T20I and became the 2nd Wicket Keeper Batsman to Score Centuries in all three formats. He is one of three Pakistani Players who have scored a century in Test, T20Is, and ODIs.