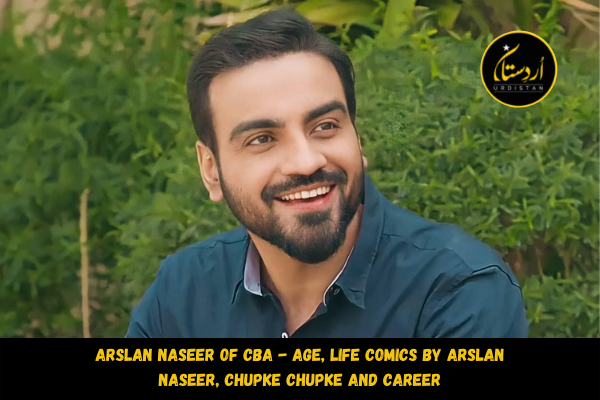 Arsalan Naseer is a Pakistani artist, Comedian, Drama actor, and YouTuber. He started his career on YouTube as a Roaster and Comedian. Later, he got noticed for his Acting Skills and offered a role in the Superhit Comedy Drama Chupke Chupke. Naseer has a huge fan following, and his fans are behind the success of his first drama. Recently, Arslan won PISA Award in the category of Best Use of Humour in Social Media (2021).

After getting his Higher School Education from Army Public School, Arslan moved to Ireland, where he pursued a Master’s degree in Business Administration. Then he moved to England, where he completed his further studies and started a job, which he quit after serving for a brief period.

There’s no information revealed by Arslan about his Family, but his parents are well educated and supported him during his career. While talking about Arslan Naseer’s wife, there is no authentic news about it; most probably, he is single yet.

After returning to Pakistan, Arslan founded his YouTube Channel and started creating comedy videos on different daily routine topics like Cricket, Pakistani Dramas, Movies, etc. It took a long time to get subscribers and viewers on YouTube, but he didn’t lay down and worked hard. As a result, his Channel is currency having over 1.5 Million Subscribers.

In 2020, Naseer was called for Saima Akram Choudhry’s written Chupke Chupke, Arslan was in leading roles, and his work is praised and liked by both viewers and Critics.

The Chemistry between Fazi (Arslan Naseer) and Mishi (Aymen Saleem) is sunk into viewers’ hearts; they fancied the Performance of Pair. Later Arslan and Mishi appeared together in many TV Shows.

Arslan’s Channel Comics by Arslan (CBA) is one of the most-watched channels in Pakistan. Following are the stats of CBA.

Lahore Qalandars back on winning Track after Zaman’s Maiden Ton