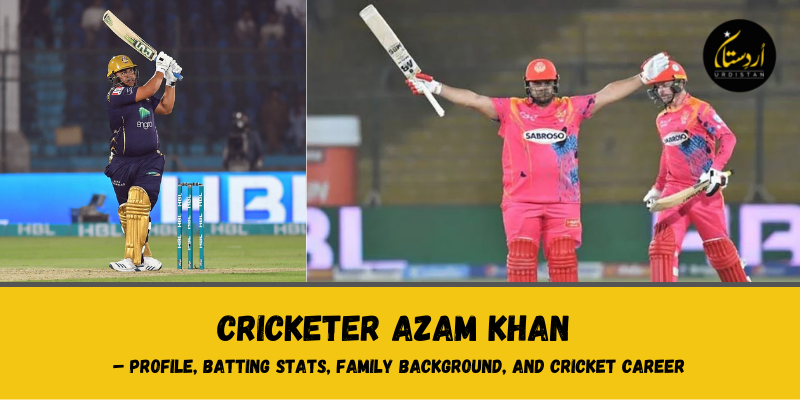 Azam Khan is a Right Handed Batsman who plays for Pakistan National Team, Quetta Gladiators, and other League Teams. He is perceived as a Hard-Hitting Batsman and a Profound Wicket-Keeper. Azam Khan’s Batting is full of entertaining strokes all over the boundary. Cricketer Azam Khan is the son of Former Wicket-Keeper Batsman and Captain Moin Khan.

He was Born on August 10, 1998, in Karachi, and currently, Azam Khan’s age is 23. Azam Khan is continuously being reprimanded for his overweightness. Critics always inquire about Azam Khan’s Weight, and his inclusion in Pakistan’s National Team is being Questioned amid his fitness. Recently, it was reported that Azam Khan had a weight of 130 KGs, but he is working hard to reduce his weight.

In September of 2018, Azam Khan played in Quaid E Azam One Day Cup and represented Pakistan Television’s team. Later in 2019, he played for Quetta Gladiators 2019, where his father was Head Coach of the Team. His performance in a league was fair, and he was named for Galle Gladiators (Owned by the Owner of Quetta Gladiators) in the Lankan Premier League. His Performance was Superb in LPL, and he was then called for Pakistan’s National Team for the tour of West Indies and England. Azam Khan made his T20I debut in the Pakistan vs. England Series. Later, in Pakistan’s series against West Indies, he got injured in Post-Match Practice; he was referred to a hospital and eliminated from the rest of the matches. His T20I career is not impressive; he played three games and scored six runs with the highest innings score of 5.

In September 2021, Chief Selector Muhammad Waseem named Azam Khan for ICC T20I World Cup 2021 in place of Former Skipper Sarfraz Ahmed. Chief Selector Justified his Selection by saying that Azam Khan has not been given consistent chances to showcase his Batting skills. However, his Selection is being rebuked by Cricket fans on Social Media.

Azam Played for the following major teams at the National and International (League) levels: