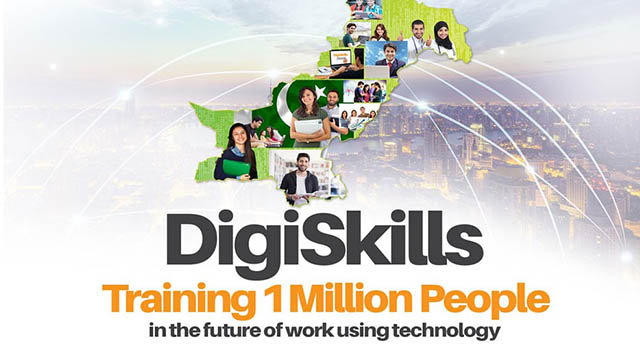 DigiSkills received 230000 registrations in just a few days, We all are very familiar with the DigiSkills.pk platform, known to be the best platform to learn Digital Skills free of cost.  From the last few batches, DigiSkills.pk has always proven its worth, importance, and performance, but they set a new height this time because of the Pakistani audience’s overwhelming response. Within 2.5 days of record time, DigiSkills received 230000 registrations, which is a remarkable accomplishment and exciting news for everyone.

Digital skills are highly regarded and in the future employments as well, and will be an important part in the future. The digital age is spreading in all areas of our lives, and it is not just for those who work in IT need to be mindful of this transition. It is also said that digital skills should be taught as third core subject and regarded with the same significance as other important subjects.

DigiSkills mission is to provide IT knowledge to as many people as they can so that after acquiring those skills, they can earn without any difficulty. In its 9th batch, which opened on 1 January 2021, DigiSkills received 230,000 registrations with an average of 68.5 registrations per minute, the registrations were obtained in a record 2.5 days. The website received an overwhelming response to their initiative, so that the government had to add an additional 20,000 seats to a special quota for Baluchistan, of which 5,000 are reserved for South Baluchistan.

The DigiSkills training program is initiated by the Government of Pakistan and led by Ministry of Information Technology and Telecommunication and Virtual University. New Batch registration started on 1st of January 2021, the website received more than 130,000 enrollments in the first 12 hours and 180 enrollments per minute and 3 enrollments per second. Their mission is to empower the youth with in-demand freelancing skills.

The training program offers 10 different courses from Digital Marketing to AutoCAD, designing and many others. Instructors of these courses are very experienced and got many likes on social media accounts as well as personally like Saad Hamid, Hisham Sarwar etc.

So far, the website has inspired more than 1.3 million people with a total of 1.7 million registrations. A research from 2018 found that for first-time freelancers, DigiSkills graduates earned about $29 per day. It is already predicted that 2021 will be the year of the gig economy, so perhaps you should also consider participating in the next batch of DigiSkills. It’s likely that if you’re from Baluchistan, you might still make the cut. To find out, if you’re interested, head over here.

The disparity in digital skills should not be anything to be scared of. Instead, it is a chance for people of all ages to jump into a new field or to get a better career in their current one, not just young people.

Indeed, DigiSkills is the best platform to enhance your digital skills without spending a single penny and also after taking these courses you will start to earn. So, if you want to learn new skills, start your digital journey today with DigiSkills– take the leap.