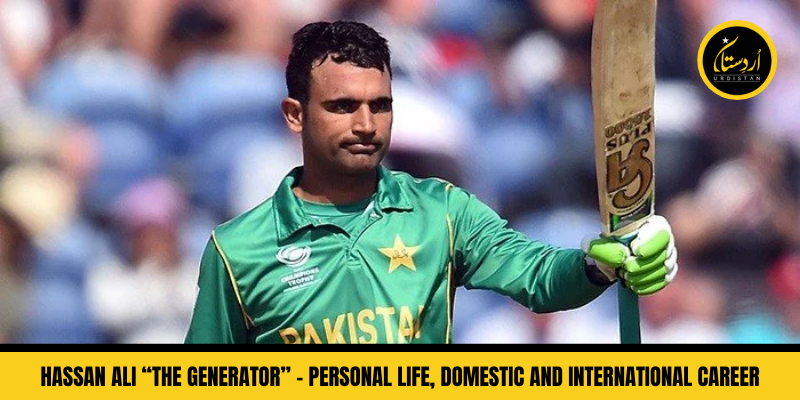 Left Handed Fakhar Zaman is Top-Notch Pakistan Cricketer and Opening Batsman in Limited Over Games. He is well known as Fakhar E Pakistan for his remarkable Century again rival-arch India in Final of ICC Champion’s Trophy 2017.

He was born in Katlang, Mardan. Currently, Fakhar Zaman’s age is 31. Fakhar completed his Matric from Mardan and Joined Pakistan Naval Forces as Sailor. He completed his training, and during his service, he represented Pakistan Navy in different tournaments; he emerged as Best Player in International Defence Cricket Challenge Cup in Australia. His Coach in the Navy encouraged him to start his Professional Cricket Career.

Fakhar resigned from Pasktian Navy and started playing for KPK, Abbottabad Falcons, and Several other Karachi teams in First Class/Domestic Cricket of Pakistan. In 2016’s Pakistan Cup, Fakhar emerged as the Second Highest Scorer of the tournament, followed by superb Performance in Quaid e Azam Trophy. In 2017, Lahore Qalandars picked him up; he was then coached by Aqib Javed and played under the mentorship of Brendon McCullum that gave him a lot of Confidence. Pakistan’s coach Mickey Arthur was Impressed by Fakhar’s Portfolio and called him for Training Camp.

Carrying his Brilliant Performance of Domestic Season, Fakhar started his T20 Career against West Indies. His next stop was the Champions Trophy, where he made his ODI debut against South Africa, scoring 31. In Grand Finale of Champions Trophy 2017, Where PAK vs INDIA were contesting for Trophy, Fakhar smashed maiden Century featured with skyscraping sixers and splendid fours after getting one chance at three runs. He was Man of the Final Match. After “Conquering” in Champions Trophy, Former Navy Sailor moved to his new Missions, where he played against England, Zimbabwe and Australia. Playing against Zimbabwe, Fakhar produced the memorable innings of 210, and he became the Highest Individual scorer of ODIs for Pakistan.

In April 2021, Fakhar scored thring 193 scores against South Africa in South Africa. He became the Highest Individual Run Scorer of ODI while Chasing and Second Highest Scorer in ODIs while chasing but losing the game. Quinton De Kock deceived him when he took the second run; De Kock dismissed the bails.

Fakhar appeared in three Tests, Score 192 with a batting average of 32.00.