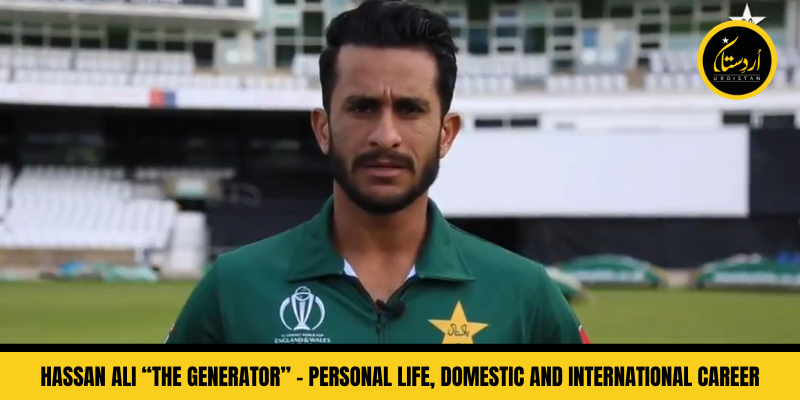 Hassan Ali is a Pakistani cricketer who plays for the Pakistan National team in ODIs, T20s and Test. He is Bowling Allrounder, bowls Medium Fast deliveries and bats with Right Hand. He is not only an Intelligent Bowler; he is a Solid hitter of a Bowl too. His Elegant Performance in Champions Trophy 2017 employed him as an Emerging Fast Bowling Talent. He emerged as the Leading Wicket taker in his Maiden ICC’s Tournament.

He was born to the Lower Middle-Class family of Mandi Bahauddin on July 2, 1994. Hassan Ali’s age is around 26. He developed his interest in Cricket during his Childhood and started playing Cricket in Local Clubs. His father, Abdul Aziz Malhi, unlike other Parents, supported Hassan Ali throughout his career. Ali considers Former Pakistani Cricketer Ata-Ur-Rehman as his Childhood Coach and Mentor.

Ali rose to the limelight when he announced his Marriage with Indian National Samiya Arzoo. Hassan Ali’s Wife is a Couple married in Dubai, United Arab Emirates. Hassan Ali and his wife were recently blessed with baby girls, and they named her Helena Hassan Ali.

During 2013-2014, Hassan Ali started playing Cricket for Sialkot’s Team. After Playing for Sialkot, he played for Islamabad’s team in Domestic Circuit. Later in 2016, Ali was hired by Peshawer Zalmi for their PSL Campaign. His performances were brilliant in almost all PSL Seasons; Zalmi retained Hasan for four consecutive Pakistan Super League Seasons. In 2020, he left Peshawer Zalmi and Joined Islamabad United’s Squad in PSL 2021.

Ali was named in Pakistan’s team tour to Ireland and England in 2016. In that tour, He made his Debut in One day and T20 Internationals. Hassan was then selected for Pak vs Australia series, where he took his Five-Wicket Haul in the 4th ODI Match. Hassan’s Test Career was started in 2017’s PAK vs WI Test Series.

Hassan’s First Global Tournament was Champions Trophy 2017. He emerged as an Intelligent Bowler who produced a lot of Variations and took Important WIckets in almost every match of the tournament. He took 13 wickets and earned the Player of the Tournament award and Golden Ball.

2019 was not promising for Hassan; he first endured a back injury and then fractured his rib, which exited him from all sorts of Cricket for the next several months. It took much time to recover and appear in National Games. In 2021, he joined the Squad back and started his mission from where he had left. He took Fi-fer (Five-Wicket Haul) in the First Match of PAK vs ZIM.

In September 2021, Pakistan Cricket Board named Hassan Ali for Pak vs NZ Series (Which is later Cancelled), PAK vs ENG and ICC T20 Cricket World Cup 2021.

How to check remaining MBs in Ufone