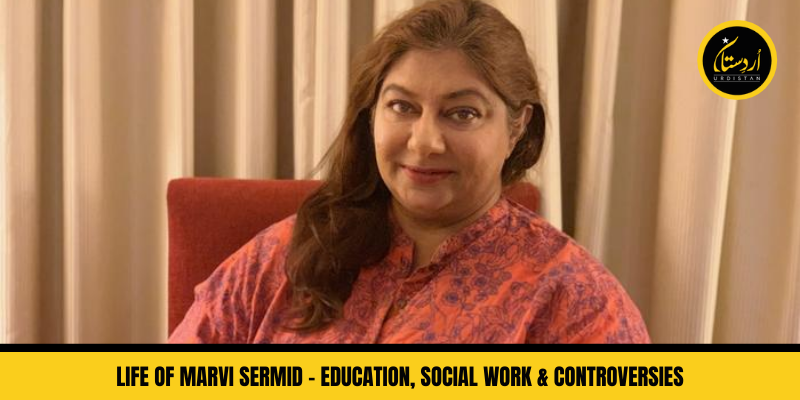 Marvi Sermid is a Pakistani Journalist, Teacher, Social and Human Rights Activist. She was born in Sialkot on June 11, 1970. She came to prominence after her controversy with Pakistani Drama Writer and Director Khalil Ur Rehman Qamar. The motto of Sermid states, “Human Rights, Peace, Counter-Extremism, Feminism.”

Marvid Sermid was raised in Sialkot and received her elementary and secondary education from Sialkot and Lahore. After completing her Higher Secondary School in Pre-Medical, she completed her master’s in Education and Science from the famous University of Punjab.

Marvi Sermid’s Father was Civil Servant and served as Directorate-General (DG), Public Relations Punjab. Her mother was also a Human rights activist; Marvi was frequently seen with her mother during Protests when she was very young. Marvi Sermid’s Husband, Sirmed Manzoor, is also a Journalist and works for South Asia Free Media Association.

Marvi started her career by raising her voice for Social Democracy, Minority rights, and Secularism. In 1990, she started participating in Practical NGOs Activities. Later in 2002, she joined Aurat Foundation’s Legislative Watch Programme. In 2004, She was accommodated at different designations in the United Nations Development Programme (UNDP) for Pakistan, the National Commission on the Status of Women, the Federal Ministry of Women’s Development, and the Parliament of Pakistan.

Not only with Khalil, Marvi has different controversies with other people like Hafiz Hamdullah, Daud Khattak, etc.

Accolades and Awards of Sermid

Sermid was selected as Member and Chairperson of the Executive council of the Human Rights Commission of Pakistan. She is a fellow of the National Endowment for Democracy.