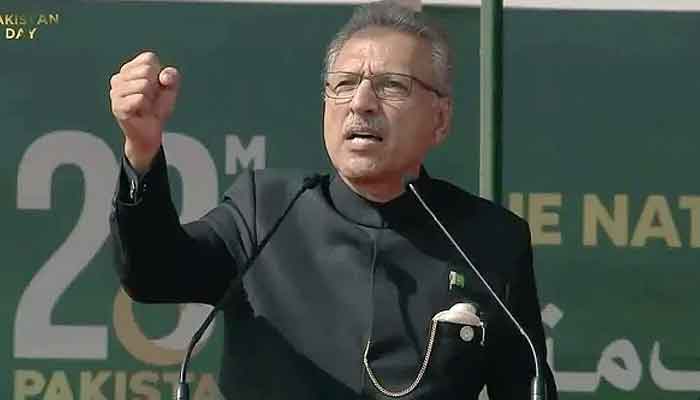 President Arif Alvi said that Pakistan Stands with Kashmir & we would not abandon the citizens of Indian-occupied Kashmir.

President Alvi congratulated the nation and military personnel involved in the parade for organizing the “spectacular” event in his speech at the Pakistan Day parade.

He also expressed gratitude to the military personnel from the friendly countries that were present at the event.

The president claimed that the day reflects the subcontinent’s Muslims’ separate identity.

“Despite the fact that Pakistan began as a weak state, we have progressed well and have evolved into a powerful country that is self-sufficient in defense,” he said.

President Alvi appreciated the military for their contributions to the country, whether it was for defense or in the event of a natural disaster. He said that Pakistan’s armed forces eliminated terror from the country.

Pakistan wants peace in the region

President Alvi said that we desire peace not only in the country but also in the region, along with wish for development of the region.

“Unfortunately, the situation in South Asia and the entire region is bad due to conspiracies, hatred, extremism, and bilateral disputes.”

He advised the leaders of the region to stop the politics of hate and religious extremism for a peaceful future.

“Pakistan wants to move forward with honesty and peace but our wish should not be taken as weakness and we reserve the right to respond befittingly to any misadventure.”

He added that we well secure our sovereignty at every cost.

The president that Pakistan Stands with Kashmir & expressed concern about the treatment to innocent people in Indian-occupied Kashmir, saying that not only Pakistan but the entire world is concerned.

“Whatever is happening in Kashmir, it has become a human tragedy.”

He reminded the world that the Kashmir conflict should be resolved in accordance with United Nations resolutions.

“The entire Pakistani nation stands by the Kashmiri people and will continue to do so.”