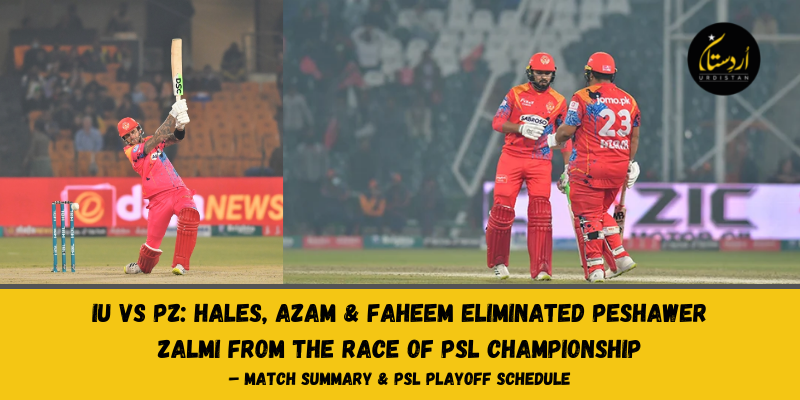 IU vs PZ Match Report: The PSL is continuing to hold thrilling and exciting matches. Islamabad United defeated Peshawar Zalmi by five wickets in the first Knockout Match of PSL 2022 played yesterday. At Crowded Gaddafi Stadium Lahore, Peshawar Zalmi started the match with batting. Muhammad Haris and Muhammad Yasir were knocked earlier by United Bowlers. Kamran Akmal stayed at the crease and scored his maiden Fifty. Shoaib Malik also scored 58 on 43 balls and Hussain Talat at the end of the innings added 28 scores to Pesahwer’s Total. After the First Innings of Zalmi, Targe for IU was 169 on the scoreboard.

Islamabad started their batting with debutants Will Jacks and Alex Hales, who returned to the Islamabad Squad after going back home. Hales proved why he returned to Pakistan and how crucial his presence is for United. He scored 62 of 49 in PSL Eliminator Match and made the smooth winning track for the next batsmen. Azam Khan and Shadab completed the job with their superb batting performances. Islamabad won the match before 3 balls and chased down the target with just 5 wickets lost. Faheem Ashraf is awarded the Player of the Match Award and now Islamabad United will face Lahore Qalandars in the Second Eliminator of PSL 2022. The winner of PSL Eliminator 2 will face Multan Sultans in PSL Final 2022.

Match Summary of IU vs PZ

In Pakistan Super League 2022, today one match is scheduled which is the 2nd Elminater and will be played between Lahore Qalandars and Islamabad United. Match will kick off at 07:30 PM.