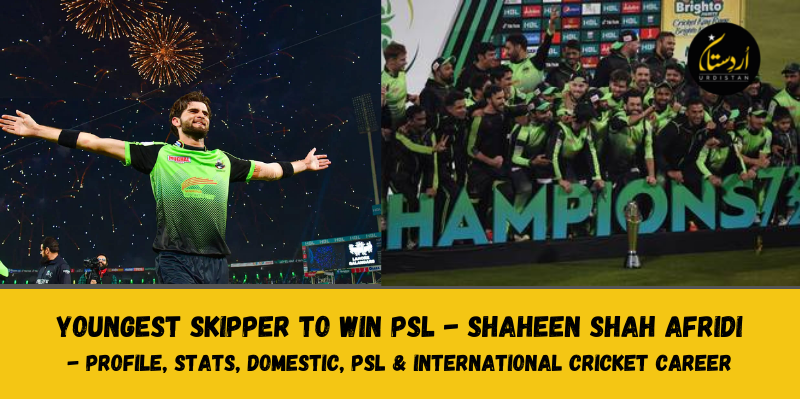 Shaheen Shah Afridi is a Left-Arm Fast Bowler of the Pakistan Cricket team. He is one of the players who represented Pakistan in all three formats of Cricket. Afridi is considered the Key Player of PSL’s franchise, Lahore Qalandars. Along with Pacer Haris Rauf, David Wiese, and Afghan Leg Spinning Magician Rashid Khan, he makes the Bowling Backbone of Qalandars. For PSL 2022, Shaheen Shah led the Squad of Lahore Qalandars for PSL VII and he became the youngest Captain to win the PSL Trophy.

Shaheen was born and raised in Landi Kotal, Khyber, KPK. He has seven brothers, and he is the youngest of all. Afridi started his Cricket from the Local Grounds of Landi Kotal. He played Tape-Ball Cricket under the guidance of her elder Brother Riaz Afridi. He was then selected in the FATA U-16 team, which was his first experience with Hard Ball. Lahore Qalandars Talent Hunt Program found his hidden talent and gave him a chance to play in Australia. From there, he played in Lahore Qalandars and then road to Pakistan’s National team.

Recently Shaheen Shah Afridi got engaged to the daughter of Legendary Cricketer Shahid Khan Afridi, Aqsa Afridi, in a Simple Ceremony in Karachi. According to news sources, both will marry soon after the completion of Aqsa’s Education.

Afridi was selected in the Pakistan Under-19 cricket team for the 2016 Under-19 Asia Cup. He started his career with Brilliant Bowling Performances; Shaheen’s Bowling stats were good enough that Dhaka Dynamites of Bangladesh Premier League and Khan Research Laboratories (Team in Quaid E Azam Trophy-First Class Cricket) signed him for their next matches. Shah made his Memorable First-Class Debut by taking eight wickets for 39 runs, which earned him a record.

After his continuous performances, Lahore Qalandars selected him in Squad for 2018. Afridi’s Bowling Performance in 2018’s Pakistan Super League was Remarkable. He received the Player of the Match Award against Multan Sultans for his five wickets giving four runs only. Later in 2018, he played for Balochistan in 2018’s Pakistan Cup.

2018 was miraculous for Shaheen; he made his T20I Debut, then One Day Internationals Debut, and then called for Test. He proved his Selection by producing Top Quality Bowling figures. His continuous luxurious performance earned him a place in Pakistan’s ODI Team for 2019’s CC Cricket World Cup. His exemplary performance of six wickets for 35 runs against Bangladesh honoured his Career to have Five Wicket Haul in ICC’s Cricket World Cup at the youngest age. During several recent fixtures, he was in hot waters for his wicketless performance, but Pakistan’s tour to West Indies gave him one more chance; he proved his legacy by winning the Player of the Match Award in the 2nd Test and Player of the Test Series.