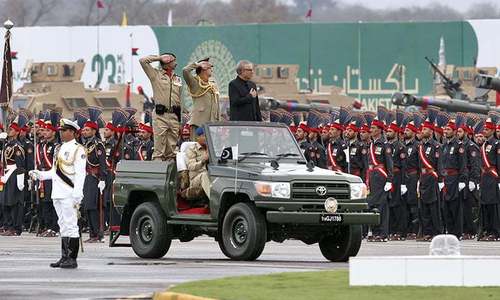 The Armed Forces Parade at the Shakar Padiyan Ground in Islamabad reflects the culture of all the provinces while delegations from all four provinces, Gilgit-Baltistan and Azad Kashmir are also participating in the parade the Pakistan Day is parade underway in Islamabad.

A flypast will also be performed on the occasion of the parade at Shakar Padian Ground.

In addition, foreign ambassadors and other senior civilian and military officials are taking part in the parade.

President Arif Ali arrived at the parade in presidential protocol.

President of Pakistan Arif Alvi inspected the parade. A local holiday has been declared on this occasion in Islamabad today.

It should be noted that due to bad weather in the federal capital, the Pakistan Day parade was postponed on March 23 and now it’s being held today in Islamabad.

After inspecting the parade by the President, the Pakistan Air Force and Pakistan Navy will give a splendid demonstration of the Flying Past and the troops of the Pakistan Army will march past and Pakistan’s defense equipment will also be displayed.

The parade will also include troops from China, Saudi Arabia, Turkey, Azerbaijan, Bahrain and Sri Lanka.