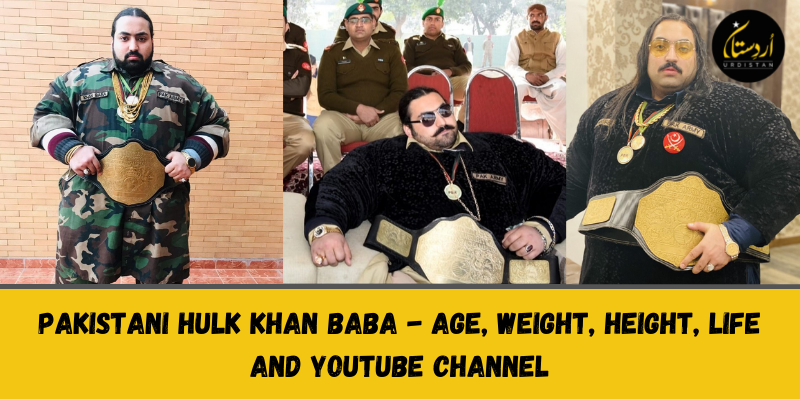 Known as the Pakistan’s Hulk, Arbab Khizer Hayat, popularly recognized as Khan Baba, is a Pakistani Wrestler, Weightlifter, YouTuber, and Vlogger. Khan Baba’s weight and diet leave people shocked; he can eat as much as ten people a day. He frequently challenges International WWE Wrestlers and especially Great Khali, an Indian Wrestler.

According to Baba, he is the World’s Second Heaviest Person. Khan Baba’s weight is around 436 Kgs (Some sources claim that he is 360 Kgs). While talking about Khan Baba’s height, he is 6 feet and 9 inches tall.

Khan Baba’s age is surprisingly 24, despite it looking old. He was born in 1997.

Khan was born into an Upper-Class Family of Mardan. He was used to watching wrestling, WWE, weight lifting, and fights. When he became 18, he stayed gaining weight. Baba became a Public Celebrity after his interview was aired on Express TV. Khan Baba openly challenges all International Wrestlers to fight and defeat him. Arbab Khizer Hayat started his Youtube Channel in 2018, on which he uploads his Dialy Life Videos.

Khan Baba claims that he has received a Gold Belt from WWE and his name is listed in Guinness Book of World Records, but both claims are not verified. Khan visited Japan, where he attracted an audience for his Weightlifting Skills.

Here are the Stats of the YouTube Channel of Paksitani Wrestler Khan Baba:

KK vs IU: Despite their star bowlers being injured, Red Hot Islamabad defeated Karachi Kings in a hair-raising match