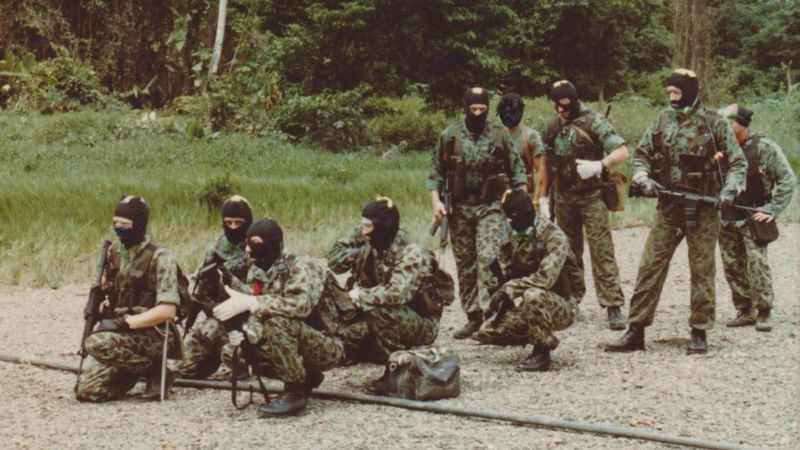 Peter McAleese was 46 and unemployed in 1989, as he puts it. Before being a soldier for hire, the Glaswegian served in the SAS.

The final job entailed assembling a group of a dozen men who would fly to Colombia to assassinate drug lord Pablo Escobar, and Plan to Kill Pablo Escobar was decided over a round of lagers in a Hereford pub.

It sounds like the start of an action movie and indeed, the story has now been turned into a film. Killing Escobar, which is released on Friday, features a dramatic reconstruction as McAleese and his former colleagues relay their extraordinary story to camera.

They were hired by Escobar’s arch-rivals, the Cali drug cartel, with the Colombian, US, and UK governments’ tacit approval, according to McAleese.

The strategy was deceptively easy. Assemble a group of ex-soldiers – who, in the words of fellow organizer David Tomkins, a mercenary who was one of Angola’s notorious trained them for 11 weeks.

The assault was being coordinated by Jorge Salcedo, a member of the Cali cartel, who wanted Tomkins to assemble a team to carry it out. The first person he approached was John McAleese.

“You don’t get asked to assassinate Pablo Escobar unless you have got the right experience,” said McAleese.

When Escobar returned to his luxurious Hacienda Napoles ranch, the Cali cartel was assured that he could be killed there. McAleese took a reconnaissance flight over the ranch and decided that it was possible.

They started out in the city of Cali, but they realized they were attracting too much attention, so they moved out to a ranch in the countryside, where they were given a large arsenal of guns.

“It was like Christmas,” McAleese says. “Everything we needed weapons-wise was there.”

The mercenaries worked hard to prepare for their mission, but only Tomkins and McAleese knew who they were going after.

They set out for Escobar’s ranch after receiving word from an informant that he was there. The assault, however, was never to take place.

The pilot was killed when the helicopter carrying McAleese and Tomkins crashed as it flew low through the clouds over the Andes.

The others were able to escape, but McAleese was too badly wounded to make it down the mountain. He lay in excruciating agony for three days before being rescued.

When Escobar learned of the attack plot, he sent his men to the mountain to locate them.

“I would have had a long, drawn-out, painful death if Pablo had caught me,” McAleese said.

He never returned to frontline combat and now attends church on a daily basis, leading a “normal spiritual life.”

Only don’t refer to him as a mercenary. “I think I was more of an adventurer,” he insists.

Top 10 grounds around the world