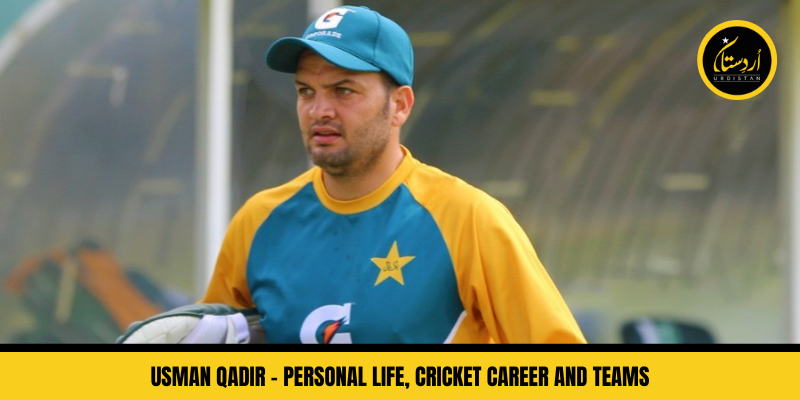 Hafiz Usman Abdul Qadir Khan is a Right-Arm Leg Break Pakistani Spinner and Son of Legendary Leg Spinner, Abdul Qadir. His Father Abdul Qadir is the inspiration for many Leg Spinners, he taught bowling to Shane Warne, who also earned a great name in bowling. Usman Qadir also learned Leg-Spin from his father and earned a good reputation for his bowling skills.

Usman Qadir was born in August 1993 in Lahore to a family of cricketers. Currently, Qadir’s age is 28. His Uncle Ali Bahadur and Brothers are also playing (or played) in Pakistan’s First Class Cricket. Qadir was raised and started professional cricket in Lahore. Usman Qadir’s wife Sobia Khan, is a Stage Performer and Pashto Film Actress. They married in 2018. Former Wicket-Keeper Batsman Umar Akmal is Brother in Law of Usman Qadir.

Qadir played List A Matches for Sui Northern’s Team and First-Class Matches for Zarai Taraqiati Bank Ltd. (ZTBL) and National Bank of Pakistan (NBP). He was selected in Pakistan’s squad for the Asian Games 2010 held in Guangzhou, China, and received a Bronze Medal. After being continuously ignored by Pakistani selectors, he relocated to Australia and started playing in Australian Domestic Cricket. He represented Western Australia and intended to play for their National Team, but as a result of some changes in Pakistan Cricket, his friend Babar Azam became Captain of the National Team. It was a turning point for Qadir, he took flight from Australia and started playing cricket in Pakistan. After a short span, he was called for the National Team’s T20 Squad for the Home Series against Zimbabwe. In 2021, Usman played his first and Only ODI Match against West Indies. Later he was selected in Pakistan’s team for PAK vs RSA, PAK vs BAN, and PAK vs AUS T20 Series In September 2021, Pakistan Cricket Board announced the Squad for ICC T20 World Cup 2021, Usman Qadir is selected in Squad as a Traveling Reserve.

Qadir played for the following teams in different tournaments as given below;