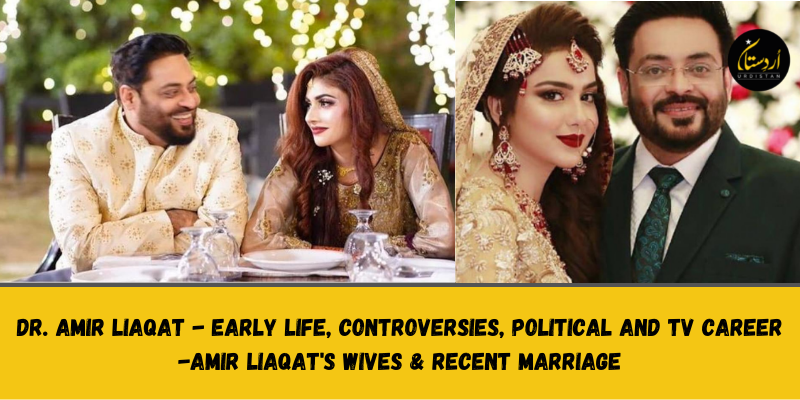 Amir Liaqat Hussain is a Pakistani Religious Scholar, TV Host, Journalist, and Member of the National Assembly. Liaqat also served as Minister of State for Religious Affairs during Musharraf’s Regime. Liaqat is one of few Pakistani TV and Politics Perosnlities who remains in the News.

Amir was Born on July 5, 1971, and his current age is fifty. His father, Sheikh Liaqat Hussain, was a Politician, while his Mother Mahmooda Sultana was Urdu Column Writer.

When we talk about the Educational Qualifications of Amir Liaqat, his every qualification is correlated with controversy. He claimed to have MBBS from Liaquat Medical College, Jamshoro, while the institute nullified his claim. So-Called Dr. Amir Liaqat pretended to have degrees from Trinity College and University, University of Karachi, Ashwood University, and the Federal Urdu University of Arts, Science and Technology. But, Either the Institutes are not recognized/illegal, or his degrees are not verified and validated from said Institutes.

Amir Liaqat started his Political Career by joining Altaf Hussain’s led Muttahida Qaumi Movement (MQM) and contested from NA 249 of Karachi in 2002’s General Elections. As a result, he was elected as a Member of the National Assembly and given the Portfolio of Minister of State for Religious Affairs.

In 2007, his Party MQM forced him to resign from the Portfolio of State Minister and after the gap of one year, MQM terminated him from the party and Liaqat left the Politics in the same year.

In 2018, Liaqat Re-Entered into Pakistani Politics and Joined Imran Khan’s Pakistan Tehreek I Insaf. He was elected again for Karachi’s Constituency as a Member of the National Assembly.

Amir started his career from Radio Channel FM101 as a Broadcaster. Later he Joined PTV for Ramzan Transmissions, But PTV terminated him because of fake degrees. Amir joined Geo News in 2001 as a Founding Member and remained there for almost nine years. In 2010, he resigned from GEO and joined ARY Digital. He Re-Joined the GEO Network in 2013 and appeared in GEO’s famous Inaam Ghar and Amaan Ramzan.

Later he joined and parted from Express Media, BOL Network, and GEO Entertainment.

Dr. Amir Liaqat is one of the Media Personalities with the most controversies. Sometimes, he makes inappropriate remarks; sometimes, he is found doing indecent acts, and people of Different schools of thought also hate his speeches.

Many times, PEMRA (Pakistan Electronic Media Regulatory Authority) has banned his appearance on TV Channels. Social Activist Jibran Nasir also requested PEMRA to take notice of him. Jibran alleged Amir for running the malicious, defamatory and life-endangering campaign” against him.

Following are the Amir Liaqat’s Books: