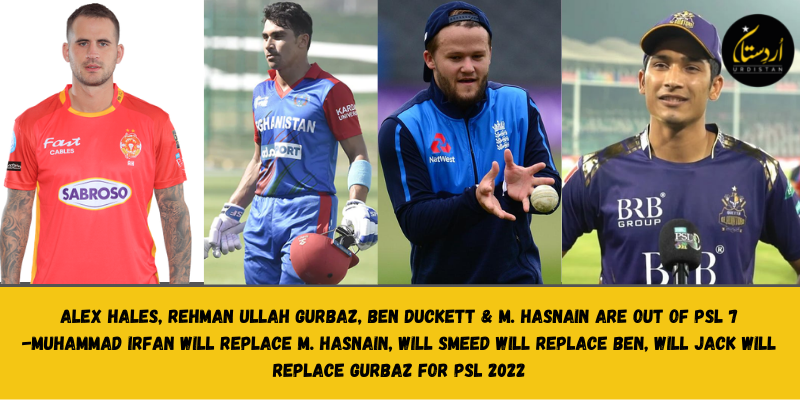 Islamabad United (IU) & Quetta Gladiators have some bad news today as several players withdrew from PSL 2022 for National Duty and Personal Reasons. After Paul Stirling, Alex Hales & Rehman Ullah Gurbaz withdrew from IU’s Squad for PSL 2022. Alex Hales left the PSL 2022 due to Personal Reasons and reported that He is disturbed from being in COVID Buble for many weeks. Rehman Ullah has been selected in Afghanistan’s Squad for Bangladesh Tour and he will leave Islamabad’s Squad due to National Duty. Will Jack from England will replace Gurbaz, while a replacement for Hales is not yet announced by IU.

On the other Side, Quetta is unfortunate in this season as Star player Shahid Afridi said “Good Bye” to the Team due to Injuries. Young Hassan Khan replaced him. Fast Bowler Muhammad Hasnain is ruled out of PSL 2022 due to illegal Bowling Action. 7.1″ tall Left Arm Pacer Muhammad Irfan will replace Hasnain in the rest of the matches. Benn Duckett also withdrew from PSL due to personal reasons and Will Smeed will replace him in his Category.