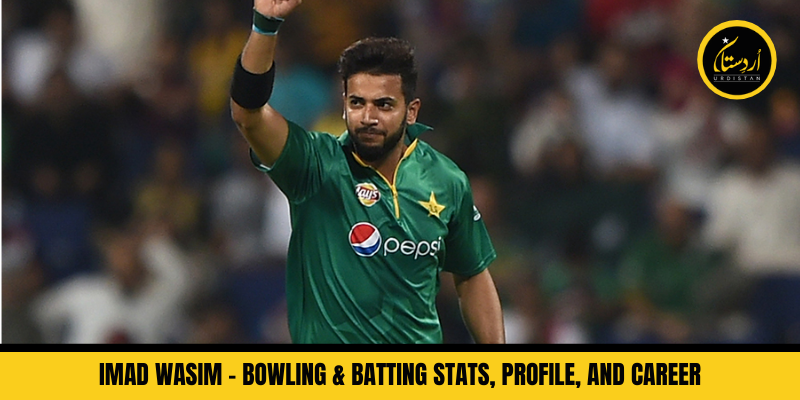 Syed Imad Waseem Haider is British-Pakistani Cricketer. He is considered a Bowling All-Rounder. Young and talented Imad Wasim is a Captain of PSL 2020’s Champion, Karachi Kings. He also leads the Northern team in the Domestic Cricket of Pakistan.

Wasim usually bowls the starting overs of an innings, and he is a slow left-arm orthodox bowler. Imad’s Batting is also superb; he bats with his left hand and is famous for playing power-hitting and skyscraping strokes.

Imad was born in Swansea, Wales, on 18 December 1988, and Imad’s Current age is 32. He was born to British-Pakistani Engineer, and his family moved to Pakistan after the birth of Imad. He received his early education from Islamabad and Played Cricket along with his studies. Wasim was studying in MBBS when Pakistan Under-19 called him; he left his studies and joined Cricket as Full-time Profession. While we talk about Imad Waseem’s Wife, she is a British turned Pakistani Lady, and recently the couple was blessed with a baby girl.

Wasim played for the following teams at International/Leagues levels:

Imad started his Domestic career in ABN-AMRO Twenty-20 Cup, in which he represented the Islamabad Leopards team. Later in 2006, he was called for List A Matches, followed by his debut in First Class Cricket in 2007.

In 2015, Zimbabwe toured Pakistan as a part of the revival of Cricket to Pakistan, Imad was given a debut cap in T20s, he made his ODI debut against Sri Lanka in the same year. Imad’s Bowling Performance made him a regular Bowling figure for Pakistan. He was part of the ICC Champions Trophy Winning Team (2017). In 2017, Imad’s bowling performance earned him Pakistan’s T20I Player of the Year, and he was placed at No. 1 in ICC T20I bowling rankings. Imad is ranked at 10th number in ICC T20I All-Time Bowler Rankings. He remained the ICC top bowler during different periods.

Under his Captaincy, Karachi Kings won the PSL title for the first time. Experts and critics appreciate his captaincy skills. Due to the Inclusion of Babar Azam in the Karachi Kings Squad for Pakistan Super League 2022, Imad stepped out in honor of the National Team’s Skipper. Behind PSL, he is a key and Icon Player in T20 leagues all over the world.

In September, Pakistan Cricket Board announced its 15-Men Squad for the upcoming ICC Cricket World Cup 2021. Imad Wasim is also nominated in the Category of All-rounders.

PZ vs QG: Smeed’s Nervous 99 in vain, Gladiators are inconsistent in their Batting, Peshawar Zalmi smashed QG by 24 Runs.