PZ vs QG: Smeed's Nervous 99 in vain, Gladiators are inconsistent in their Batting, Peshawar Zalmi smashed QG by 24 Runs. 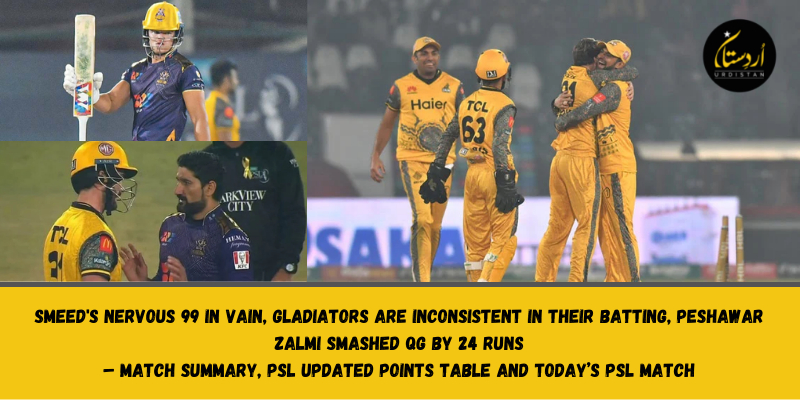 In Match Number 22 of PSL 2022, Peshawar Zalmi defeated Quetta Gladiators by 24 Runs after defending 185 Runs. Zalmi’s Wahab won the toss and chose to bat first, which resulted in a wise decision. Zazlmi scored 185 runs with 7 wickets lost. Shoaib Malik scored 58 runs, Hussain Talat 51, and Ben Cutting scored 34 runs on just 14 balls. During the Zalmis Batting, there was an exchange of heated words between Ben Cutting and Sohail Tanveer. Ben Cutting smashed Tanveer 4 sixes in Penultimate over and passed illicit Gestures towards Tanveer. Later in the Last Over, Tanveer took the Catch of Cutting and replied with the same practice. Ben Cuttings and Tanveer’s fight is not the new one, it is the second version of CPL’s Fight.

Chasing Peshawar’s Target of 185, Usman Qadir disrupted the Batting Line up of Gladiators with his magical singing deliveries. After scoring 97 in Quetta’s opening game, Will Smeed of the Quetta Gladiators who was on the bench in previous games scored Nervous 99. Quetta’s Resistance was not enough to chase the target and they ended with another loss in PSL 2022. The likelihood of Quetta Gladiators qualifying for the next phase is decreasing after each Match.

Match Summary of QG vs PZ

Here is the Updated Points Table of Pakistan Super League 2022 after today’s PSL Match. Multan Sultans remained at Top while Kings at the bottom.