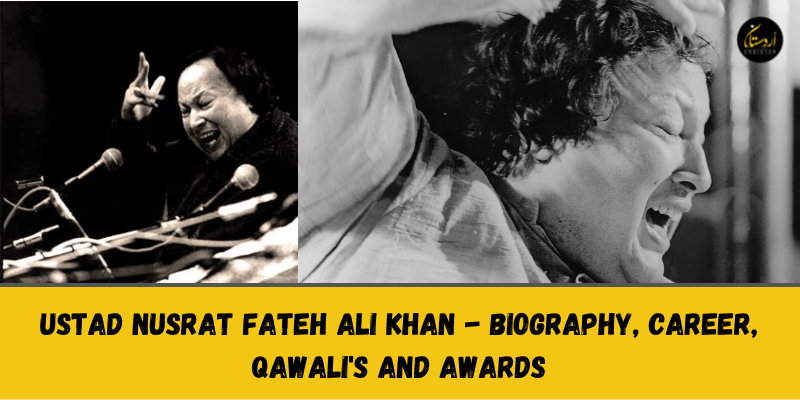 Real Name of Nusrat Fateh Ali Khan is Pervez Fateh Ali Khan, who was born in 1948. He is a legendary Musician, Vocalist, Songwriter, and Qawwali Singer. His energetic voice is equally famous in India and Bangladesh. He was awarded Presidential Pride of Performance from the Government of Pakistan. NFAK was given the title of “Shahenshah-e-Qawwali” (King of Kings of Qawwali) and often called Ustad Nusrat Fateh Ali Khan. Nusrat Fateh Ali Khan’s Songs, Ghazals and Qawwalis have crossed 500 Million Plus Views on YouTube.

Nusrat Fateh Ali Khan was born in Lyallpur in a family of singers and musicians. His family was affiliated with music for 600 years. NFAK’s father wanted him to be a Doctor or Engineer, but NFAK was interested in the same field as his ancestors. His family includes Fateh Ali Khan, His Father, his mother was Housewife. Nusrat has four elder sisters and one younger brother, Farrukh Fateh Ali Khan; he is the father of legendary Rahat Fateh Ali Khan.

Nusrat’s music career was started when his uncle Mubarak Ali Khan died. After his death, Nusrat and his cousin Mujahid Mubarak Ali Khan took over the Family Band. He has sung for Radio Pakistan, PTV, TV Songs, Bollywood, and Hollywood films. He has usually sung in Punjabi, Urdu, and Persian Language. Verily, Nusrat Fateh Ali Khan Qawwalis are matchless and most popular, but his Ghazals are also very famous in the Indian Subcontinent.

Here is the List of Famous Nusrat Fateh Ali Khan’s Songs and Qawwalis:

Nusrat Fateh Ali Khan is the beneficiary of many National And International Awards. Some of his awards are:

Death of the Legend – NFAK

Nusrat’s 25-Year exceptional music career came to an end on August 16, 1997. British Doctors claimed Nusrat’s Death due to the negligence of Pakistani Doctors and his increased weight. Nusrat died in the United Kingdom, and his body was transferred to Faisalabad, Pakistan. A huge mass of people offered the state funeral of the Emperor of Qawwali in Faisalabad, and he was buried in the native graveyard leaving his fans mourning.

Read About Top Ten Pakistani Singers of All Time here.