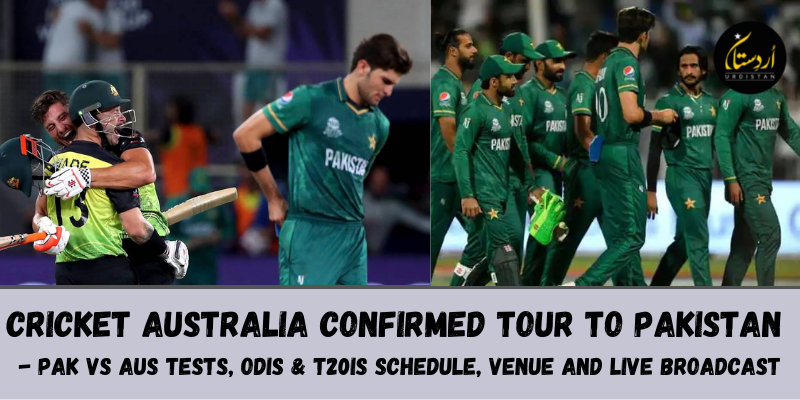 After a gap of 24 years, Aussies are ready to land in the land of cricket, Pakistan. Cricket Australia says the Australian team is prepared to bring cheers, glees, and delights back to Pakistan’s abandoned stadiums. The news of Australia’s tour brings a wave of happiness to the Pakistan Cricket Board, Cricketing Biodeis, and fans. Pakistan is eager to host the Top Cricket Playing Nation.

Chairman Pakistan Cricket Board, Ramiz Raja, thanked Cricket Australia for this decision and hoped that more teams would come to Pakistan after this tour.

According to the Statement made by Pastan Cricket Board, Pakistan’s Squad for the Series will announce on Feb 9 and the players will be selected on the basis of their performance in the Pakistan Super League 7 and overall Performances. Babar Azam will lead the Pakistan Squad.

Pakistan and Australia will play three test matches at different venues. Here is the Schedule of the Pakistan vs. Australia Test Matches.

Here is the Schedule of One-Day International Matches.

For Live Score of Pakistan vs. Australia Matches, browse espncricinfo, cricbuzz, cricketpaksitan, and UrduPoint. Pak vs. Aus Live Scores will also be telecasted on News Channel Sites of Pakistan.

There is no information about Live Broadcasters for the Australians’ tour of Pakistan. Most Probably, PTV Sports, Ten Sports, and cricket.com.au will cover live telecasts of Pak vs Aus matches.

IU vs QG: In the battle with Gladiators, Paul Stirling, Azam Khan, and Munro triumphed, leading IU to win by 43 runs.

IU vs KK: Islamabad United won the match with ease.