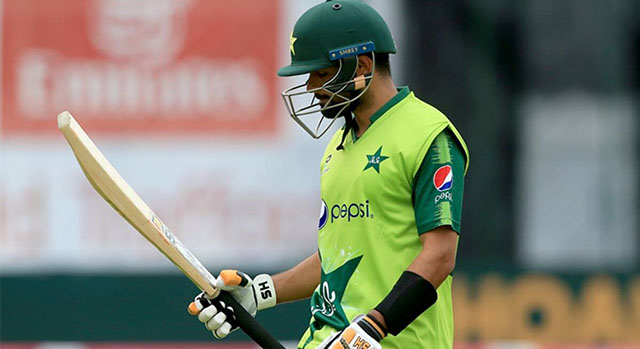 Fractured thumb forces Babar Azam out of New Zealand T20 series, The injury to Captain Babar came just five days ahead of the launch of the T20 series.

On Sunday, Pakistan’s training for the T20 series against New Zealand was hit with Babar Azam suffering a fracture on his right thumb during a practice session in Queensland early in the morning.

Fractured thumb forces Babar Azam to stay out of NZ T20 series, The batsman’s injury is considered a major jolt to the prospects of the nation winning the series.

In recent times, Babar has remained the linchpin of Pakistan’s batting and has singlehandedly helped the nation win the majority of T20 matches.

During a throw-down session, Babar sustained the injury and was rushed to a nearby hospital in Queenstown, where X-rays confirmed the fracture. 12-day rest was also recommended to Imam, which confirmed his non-availability for the four-day Shaheen’s match against New Zealand on December 17.

As a result, Babar will not be able to compete in the net for at least 12 days, meaning he will not be available for the T20Is to be played against New Zealand on 18, 20 and 22 December.

Shadab Khan, Pakistan’s T20 vice-captain, also has a groin niggle, which limited his involvement in Sunday’s net sessions to batting only. The decision as to his role in the Auckland T20I will be taken closer to the match.

In Babar’s absence, Mohammad Rizwan will become Pakistan’s 33rd test captain when he leads the side.

Head coach Misbahul Haq said:  Babar Azam is our top player and his absence in T20 is frustrating but this will provide the other new players with chances to step up and appreciate their duties.”