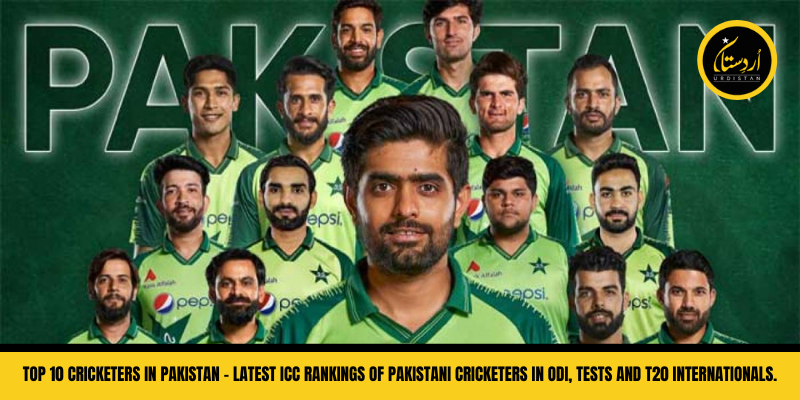 Classy Babar Azam is the finest Cricketer of Pakistan, but he is also one of the Superb Batters in the World in All Formats of Cricket. Babar Azam holds many International & National Awards because of his Brilliant Batting Skills. Azam was born and raised in Lahore, Pakistan, and he is currently a resident of Lahore. Babar started his career as a Ball-Boy, and then the world witnessed him as ICC’s top-ranked T20 and ODI Batsman.

Cricketer Babar Azam’s career is full of records. He is fastest to score 2500 runs in T20Is, second fastest to score 2000 scores in One Day Internationals, 2nd Most runs-scorer in a calendar year (2021), and many other records.

Rizwan struggled very hard to make it into Pakistan’s National Squad; soon after his inclusion in Squad, he started earning fame because of his Classical Batting Skills. Recently, Rizwan won the hearts of fans for playing the Semi-Finals despite being admitted to ICU a day before the Match.

The Energetic, Young, and Passionate Shaheen Shah is considered the backbone of Pakistan’s Bowling. He is Left-Handed Fast Bowler. Shaheen Shah is famous for dislodging stumps with his off-swinger deliveries in opening overs. Shaheen Shah Afridi wears the Shirt Number 10, of Legendary Pakistani Cricketer Shahid Khan Afridi, and he is the Son-in-Law of Shahid Khan.

Afridi is a product of Lahore Qalandars; he was picked by Lahore Qalandars and performed in the Pakistan Super League and then selected into the National Squad of Pakistan. Shaheen Shah Afridi is currently playing all the formats of cricket for Pakistan.

Left Handed Batsman and Part-time bowler Fawad Alam is one of the best Pakistani cricketers. Even though he wasn’t selected in the Test Squad for ten years, he never got disappointed and performed brilliant scoring displays in Domestic Cricket. After a gap of 10 years, he was again called for the National Test Squad against Sri Lanka. His Comeback in Cricket is furnished with Centuries and Match Winning Performances.

When Fawad Tahrir Alam was not picked for International Eleven, he started his acting career and appeared in Serials Ghar Damad & Khudkash Muhabbat.

Right Handed Batter & Right Arm Spinner Shoaib Malik is one of the Senior Players in the National Cricket Team. Malik has been playing cricket since 1999. He has played the Last ICC T20 World Cup 2021 at the age of 39. Shoaib Malik Captained Team Pakistan from 2007 to 2009, and then stepped down. Malik is the first Pakistani to score 10,000+ scores in T20 Cricket. Shoaib Mailk is the Player who has played the most number of T20 International Matches.

Pakistan Navy’s Marine Sailor Fakhar Zaman is the Highest Individual ODI Scorer of Pakistan. Lahore Qalandar’s Produced Fakhar is the First Pakistani to score a Double Century. Zaman also scored 193 vs. South Africa while chasing, which is the highest individual score by any cricketer in chasing the Target.

Fakhar Zaman has played all three formats for Pakistan. He is famous for scoring a remarkable match-winning century against arch-rival India in the Finals of the Champions Trophy. Here are Fakhar’s Career Stats and Rankings:

Left Handed Batsman and Left Arm Off-Break Bowler Imad Wasim are one of the best Pakistani All-Rounders. He remained the Top-ranked T20 Allrounder in the World. All-Rounder Imad Wasim is Captain of Karachi Kings, the Biggest Franchise of PSL. He captained the Karachi Kings while Shahid Afridi & Skipper of the National Team Babar Azam also played under his captaincy.

Waseem is one of the finest Off Break bowlers. He is famous for fast deliveries without swing, which is difficult for batters to play. Wasim has represented Pakistan in Limited Overs Matches. Here is Imad Wasim’s Career Stats;

Hafiz Sarfraz Ahmed is the Former Captain of Pakistan’s National Team in All Formats of Cricket. Sarfraz made Pakistan win two ICC titles under his captaincy. His career has flourished with ICC Champions Trophy (2017) and ICC Under 19 World Cup Ahmed remained one of the successful captains of Pakistan, and while he was Captain, Pakistan won 17 T20I matches in the streak.

Sarfraz Ahmed is Captaining the Quetta Gladiators team in the Pakistan Super League. Under his captaincy, Quetta twice made it to the finals and stood winner of the Tournament once. Here is Srafraz Ahmed’ Career Stats:

Test Cricketer Azhar Ali is a Right Handed Pakistani Batter who is included in the list of very few Cricketers who have scored Triple Century in Test Cricket. Azhar Ali captained the Pakistan Team in Tests and ODIs. Ali also led the Lahore Qalandars Squad in the maiden PSL Season. Although Azhar Ali is a Specialist Pksitani Batter for Test Format, he has 18 Centuries in Test Matches and 3 Centuries in One Day Internationals. Given are Azhar Ali’s Batting Stats:

Right Handed Spinner and Batter, Muhammad Hafeez is a specialist Pakistani cricketer in Limited Overs. Hafeez has scored over 10,000 Scores in T20I+ODI+Tests. Allrounder Muhammad Hafeez has been in the eyes of ICC for Bowling Action (Later, ICC declared his action legal), but his bowling is amazingly superb; he is a sign of danger for left-handed batters. Muhammad Hafeez’s Career is full of ups and downs, he captained the National T20 team, and under his captaincy, Pakistan reached the Semi-Finals of ICC T20 Cup 2012-13.