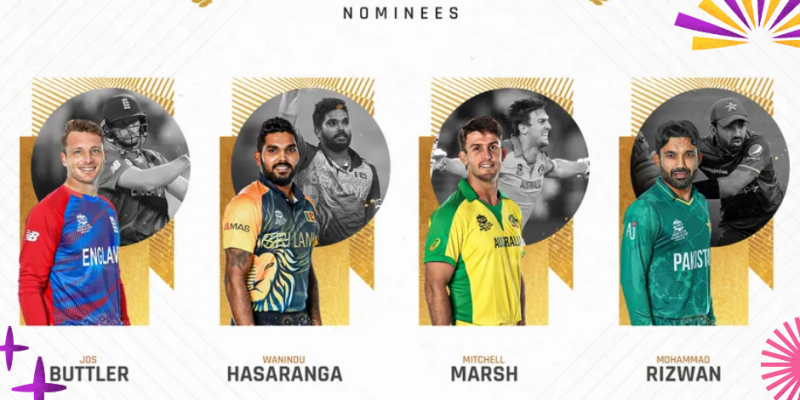 For the year 2021, the International Cricket Council (ICC) has announced the List of Players for the award of ICC Men’s T20 Player of 2021. This year, Four Nominations are made from each Pakistan, Sri Lanka, England, and ICC T20 Worldcup 2021 Champion, Australia. Nominees are;

Hardworking and combative player Muhammad Rizwan wowed fans, viewers, and critics with stunning performances with his Batand behind the stumps. Rizwan was once the Target of Pakistani Memers in the past for his inconsistent Performance, but Rizwan answered the Critics with his Hard Work and Struggle. The Opening Pair of Muhammad Rizwan and Skipper Babar Azam is considered the “Dangerous” for Opponent Teams.

SriLnkan Bowler Wanindu Hasaranga impressed the Cricketing World through his Wonderful Bowling. Recently Debuted Srilank Bowler Wanindu performed elegantly during World Cup matches despite his team was ruled out early from the Tournament. The Only World Cup’s Hatcick is also named on Hasaranga’s Career. He took his Hat Trick against South Africa and ended the Match with Marvelous 3/20. Here Wanindu Hasaranga’s yearly Stats;

English Player, Right Handed Batter and WicketKeeper Jos Buttler is also nominated for ICC T20 Player of the Year 2021 Award. Playing 14 Matches, Jos scored over 550 Runs with One T20I Century. Butler outclassed Srilankan Team during the World Cup Match where he scored Unbeaten Century in just 67 Balls and earned Player of the MAtch Awards. Behind the Wickets, Jos dismissed 13 players and made them Go Pavilion.  Here are Jos Buttler’s Stats in 2021.